Welcome to Hue City – The capital of the Nguyen emperors Hue City – The capital of the Nguyen emperors still resonates with the glories of imperial Vietnam, even though many of its finest buildings were destroyed during the American War.

Hue owes its charm partly to its location on the Perfume River – picturesque on a clear day, atmospheric even in less flattering weather. Today the city blends new and old as sleek modern hotels tower over crumbling century-old Citadel walls.

A few touts are a minor hassle, but Hue remains a tranquil, conservative city with just the right concentration of nightlife.

Where should you go? The Imperial Enclosure is a citadel-within-a-citadel, housing the emperor’s residence, temples and palaces, and the main buildings of state, within 6m-high, 2.5km-long walls. What’s left is only a fraction of the original – the enclosure was badly bombed during the French and American Wars, and only 20 of its 148 buildings survived. This is a fascinating site easily worth half a day, but poor signage can make navigation a bit difficult. Restoration and reconstruction are ongoing. 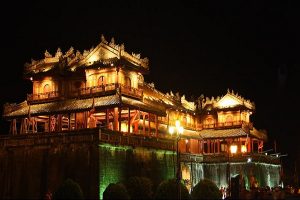 It’s best to approach the sights starting from Ngo Mon Gate and moving anti-clockwise around the enclosure. The principal entrance to the Imperial Enclosure is Ngo Mon Gate, which faces the Flag Tower. The central passageway with its yellow doors was reserved for the use of the Emperor, as was the bridge across the lotus pond. Others had to use the gates to either side and the paths around the pond. On top of the gate is Ngu Phung (Belvedere of the Five Phoenixes); on its upper level is a huge drum and bell.

The emperor appeared here on important occasions, most notably for the promulgation of the lunar calendar. On 30 August 1945, the Nguyen dynasty ended here when Emperor Bao Dai abdicated to a delegation sent by Ho Chi Minh. Citadel, this pagoda is an icon of Vietnam and as potent a symbol of Hue as the Citadel. The 21m-high octagonal tower, Thap Phuoc Duyen, was constructed under the reign of Emperor Thieu Tri in 1844. Each of its seven stories is dedicated to a manushi-buddha (a Buddha that appeared in human form). Visit in the morning before tour groups show up. How to get Vietnam temporary residence card ?
Cuc Gach Quan – Tray of Vietnamese family
Hello!
Get Upto 50% OFF - Rental Apartment
Leave your information below,
we will send discounting apartments listing to you.